THE EAGLES HAVE LANDED

Not quite the 1976 film plot but an exciting event nonetheless . . . in the Dulles Greenway wetlands in Leesburg. 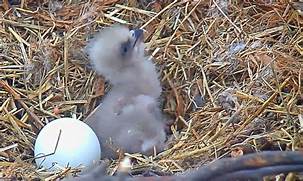 Mom Rosa and Dad Martin, who have resided in the Greenway’s wetlands since 2005, nested two eggs in February; the second eaglet is expected to hatch any day. Mom and Dad’s names were selected by students in Sterling in honor of Rosa Parks and Martin Luther King Jr.

The Bald Eagle was chosen in 1782 after the American Revolution as the symbol of the United States because of its great strength, stately looks, long life, and because it is native to North America.

Bald eagles typically lay one to three eggs per year and begin to hatch after about 35 days of incubation. It can then take up to two days for the hatchling to emerge. The next stage in the nesting process will be rearing and preparing the baby eaglets to fledge (develop wing feathers allowing flight), which is at about 10–12 weeks of age.

The eagles’ live-stream camera is available for viewing here: www.dullesgreenway.com/eagle-cam/

In the film, Winston Churchill is the target of the plot; in Loudoun, the target is conservation.

HERE COMES NOT THE JUDGE

It’s not common, but sometimes it happens.

A Fairfax County district judge’s renomination was withdrawn after concerns about his conduct surfaced in a hearing of the General Assembly. The judge was seeking reappointment to a six-year term on the bench. When he appeared before a joint meeting of the House Committee for Courts of Justice and Senate Committee on the Judiciary in December, lawmakers pressed him on allegations raised by attorneys who litigated in his courtroom.

Among 50 judges in a survey of attorneys and other members of the court system (bailiffs, court reporters and clerks), he ranked last. The low scores were across the board, including in categories such as impartiality, fairness, and knowledge of the law. The judge said he was shocked and embarrassed and cited personal matters such as underlying medical issues and treatment for anxiety, as well as other conditions such as the pandemic and the new Commonwealth’s Attorney (?).

Former Delegate Mark Levine (D-Alexandria), whose term ended in January, pushed for the hearing, noting that attorneys had contacted him over concerns that the process “rubber-stamped” the confirmation process for judges. Not this time.

The selection process is not subject to voter determination. It is a reminder that elections have consequences.

The AG says those victims might still be alive if the offender had faced stiffer prosecution and punishment in Fairfax County last year. To quote the AG: “It doesn’t take a rocket scientist to realize if the prosecutor had gone forward and applied the proper sentence in this situation and not reduced to a misdemeanor, this individual who is a serial killer would not have been back on the street.” Descano disputes this, saying “We did not have a positive ID … we did not have video … we did not have any type of fingerprint evidence.” He went on to criticize Miyares’ statements, accusing him of disregarding legal standards and attacking him to score political points.

“I think that talk coming from the attorney general is really shameful and speaks poorly of him as a public servant,” Descano said. “As somebody who should know how prosecution works, he should be familiar with the fact that prosecutors every single day in every jurisdiction have to do what they can with the evidence presented.”

Of course the actual victims are the residents of the county and Commonwealth. Political gamesmanship does not produce justice or confidence.