The Virginia Public Access Project (VPAP) produces visuals that helpfully portray the parameters of political and cultural activity in the Commonwealth. Its latest graph provides a political scorecard of the results of the two political parties with respect to legislation. The data is a snapshot in time of partisan political dynamics that affect the lives of all residents. Some interpretations are offered below the graph. 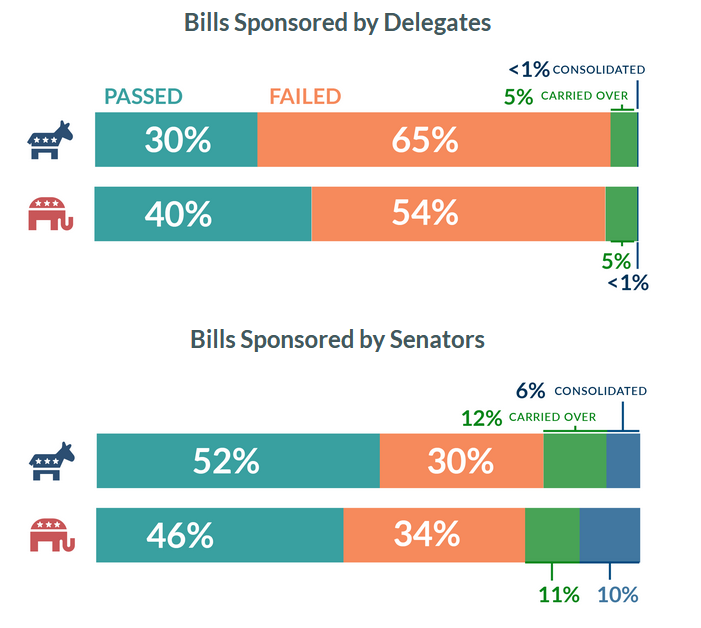 The 65% failure figure for Democratic bills in the House of Delegates is astonishing but likely reflects the new majority reality. At the same time, the 54% failure rate of Republican measures in a chamber where they have the majority may simply reflect newbie anxiety to make an impression at home flooding the legislative sausage maker but thwarted by party seniority protocols and narrow committee membership majorities. The chamber’s roughly 10% differences in the success/failure rates are a paradigm of political inertia amplified by partisan interests.

Democrats had boasted that the Senate would be a “brick wall” of protection of partisan interests and holding fast for progress made in prior years. The 52% Democratic success rate achieved on a majority margin of 2 votes in the chamber is surprising. That surprise is highlighted by the 46% success rate for Republican bills in the upper chamber. The comparatively narrow difference in failure rates suggests a chamber where compromise seems possible.

The work of the General Assembly was not completed during the regularly scheduled session as the state’s budget  remains under discussion. It would not be a stretch to infer from the data parsing the legislative outcomes that partisan interests regarding fiscal matters will not be one-sided and demand resolution.

Pundits and political scientists have a trove of material to appreciate and interpret. That process will carry into the 2022 midterms for voters to consider.