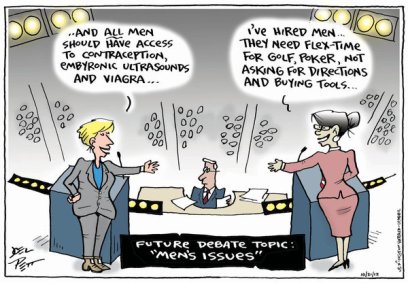 It is in the nature of any sizable change that it is hard to see it while it is ongoing. Some people foresee something and think they know the future for sure; others deny change, even as it is underway, insisting that natural laws are immutable. More often, change is not a straight line, zigging and zagging from here to there. Sometimes it even looks like a pendulum, swinging from one position to another, with no ultimate difference at all.

So it is difficult to say whether we are currently in the middle of a long-term change of the political climate or a temporary oscillation. Did we really shift from the era of yearning for small-government, to a celebration of big government in 50 days? Did the election of Barack Obama mark a change in attitudes toward race in the US? Does the political success of Nancy Pelosi as speaker of the House of Representatives and Kamala Harris as vice president represent a change in our attitudes about gender?

I would like to believe that all of these developments truly represent some fundamental tectonic shifts in our political climate. Borrowing from an environmental metaphor for a moment, after an earthquake or volcanic eruption, the surface does not settle back to where it was previously. Yet human behavior after these seismic events often does settle back into old patterns, confident that lightning doesn’t strike twice in the same place, that having survived a once-in-a-long-time event, we are somehow “protected” from its recurrence.

Let’s get specific. Here in Virginia, we have more female political leadership at every level. Notably within the Democratic party, we have a female chair of the state party (Susan Swecker), three female members of our congressional delegation (Elaine Luria, Abigail Spanberger, and Jennifer Wexton), a female speaker of the House (Eileen Filler-Corn), a female majority leader and chair of the House Democratic Caucus (Charniele Herring), a female chair of the Senate Finance Committee (Janet Howell), two female candidates for governor (Jennifer Carroll Foy and Jennifer McClellan), and three female contenders for lieutenant governor (Haya Ayala, Elizabeth Guzman, and Andria McClellan). To be fair, the GOP also has one candidate for statewide office (Amanda Chase for governor), but “Trump in heels” isn’t exactly a claim to female leadership.

What do we mean by “female leadership”? . . . . Women in politics have now begun defining an ethic built on relationships. For example, Mothers Against Drunk Driving and The Coalition to Reduce Gun Violence address issues that affect both males and females. Yet by connecting their policy positions to ideas about shared responsibilities in families (and by extension in communities), these movements brought maternal frames of caring and nurturing to otherwise genderless political debates.

Which brings us right to the point: what do we mean by “female leadership”? When the 19th Amendment to the US Constitution was being debated a century ago, many men argued that women were emotionally too sentimental and soft-hearted to make the tough decisions required for political leadership. The same argument was made when women sought more roles in the military. Particularly in the ‘70s and ’80s as women fought for access to top corporate and political jobs, many women believed they had to be pseudo-men: as tough, scheming, ruthless, crude, ambitious, and assertive as the men they wanted to lead. Critics of Nancy Pelosi (a member of that generation) have not charged that she is too “soft” for the job, but more often, the opposite (you can’t win!). For better or worse, that generation’s successes made it possible for women in the ‘90s and since to begin defining a different style.

Women have been leaders for a long time in churches, education, human rights, and health care, where skills at collaborative leadership and values of caring provided the backbone for public and private organizations. Women in politics have now begun defining an ethic built on relationships. For example, Mothers Against Drunk Driving and The Coalition to Reduce Gun Violence address issues that affect both males and females. Yet by connecting their policy positions to ideas about shared responsibilities in families (and by extension in communities), these movements brought maternal frames of caring and nurturing to otherwise genderless political debates. Are women the only ones who care about health care, or public safety, or domestic violence? Certainly not. But women have taken on leadership in all of these issue areas, and have begun shaping an agenda that includes equality of economic opportunity, but goes far beyond that.

If women win high political offices, should they bring a “female style” to their work? Should we (their constituents) expect females to behave differently than their male counterparts? As the binary world of gender identity gives way, do these questions even matter anymore?

Which brings us back to the question of how change works. Is the future path of our political climate a “hockey stick” trajectory (as scientists such as Michael Mann have drawn for environmental climate change), or a swinging pendulum? Will women change our political culture into a kinder and gentler one?

I hope that we are on a path of increasing human rights, opportunity, and compassion. I hope women will lead us on that path. I hope that men will learn. I hope that male-led, testosterone-fueled “winning-at-all-cost” leadership has had its day. I hope that a new generation of female leaders will bring a different political culture to our troubled world. I am ready to give a different, less-militaristic approach a chance. I want to believe that the political climate is changing.

My hopes for progress may be irrational. Surely, there will be adverse reactions, backslides, and challenges along the way. Nonetheless, being a child of the civil rights movement, I fall back on the hymn, “Keep your eyes on the prize, hold on.” I think the American political climate IS changing, and for the better.

‹ Tone Deaf in a Cone of Silence
Gaslight Parade ›