Home › CIVIL RIGHTS › Statehood for DC: Not a Good Idea

Statehood for DC: Not a Good Idea 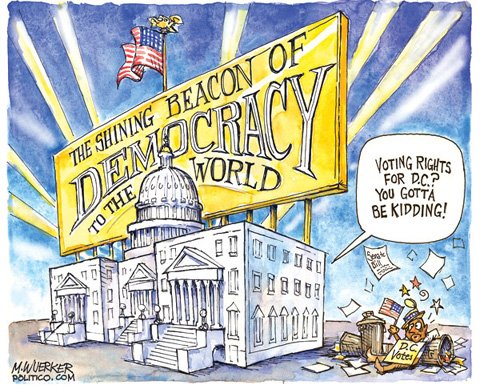 Since the Democrats captured a one-VP-vote majority in the United States Senate, a variant strain of Potomac fever has emerged infecting many DMV residents, pundits, and commentators. The fever has been incubated and accelerated, in part, as HR 1 as passed by the House contains a provision to confer statehood on the District of Columbia. Many of these advocates characterize themselves as progressives in despair at the failure of officials to hear and respond to the injustice of the “taxation without representation” motto on DC license plates.

Clearly, the majority-led House and barely-majority Senate favor statehood and the gain of two senators, as well as a plenary (unconditional) new member of the House. The vision of Senate additions tends to create a deep appetite for Dem supporters to secure firm majority control of the upper chamber. It must be noted that DC statehood would also contribute to potential Democratic votes in the Electoral College, an institution that continues under heavy criticism as a structural distortion of the nation’s popular vote from the very same progressives.

The Senate itself has come under increasing detraction from the same statehood advocates because, like the Electoral College, Congress’ upper chamber suffers from a similar, undemocratic distortion caused by the structural scheme of the Constitution.  These conflicting currents have largely been ignored due to the Potomac fever variant.

Wyoming has a population of 507,700 and California boasts 39.6 million, but both have two senators each. The proportion, or disproportion, operates to the favor of less populated states and to the disadvantage of more populated ones by democratic measure. The District of Columbia has a population of about 705,000, the approximate average number of residents in a House district.

It is clear from these data that adding DC to the union of states exacerbates the balance of power of the popular vote in the Senate and Electoral College.

It is clear from these data that adding DC to the union of states only further exacerbates the effect of the popular vote in the Senate and Electoral College. Most advocates may be biased by the potential short-term gain for Democrats while ignoring contemporary currents seeking to reform the Electoral College and rein in the outsized political influence and power of the Senate and its members. Think Mitch McConnell and three SCOTUS appointments. Or Senator Joe Manchin parlaying the one-vote margin to eliminate a presidential appointee.

The matter of voting rights and representation for the residents of the District is a clear issue of equity and equality and ought to be settled. It is possible to meet the needs of the population and the interests of the 50 states without amending the Constitution or creating further distortion of the principle of one person, one vote.

Designating DC for ten years until the next census as a congressional district in Maryland offers its residents full status Congressional representation in both chambers and adds an Electoral College and House seat for Maryland. As DC’s loss is Maryland’s gain, the net result is even for the nation. Maryland Republicans are likely to resist such a change as they are already and have been for a long time a minority party. On the other hand, the federal government has a great deal in its purse to persuade Maryland to accommodate such a transaction for the benefit of DC, its residents, and in solution of a knotty problem of fairness.

The district’s local government enterprise could be accommodated similar to that of Baltimore or, even, as a county in Maryland’s existing folioi.

A warp speed resolution is not required in this case, as Potomac fever has a long gestation cycle. The pandemic has, however, been shown to cause a deterioration in political cognition, resulting in destructive choices. Social and political distancing from screeds in favor of statehood are recommended though not mandatory. While discovery of a vaccine is anticipated, most physicians presently prescribe bed rest and prayerful contemplation to avoid a further outbreak of symptoms and spread of this virus.