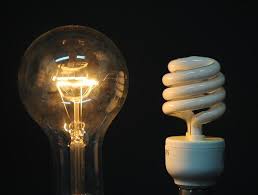 Does it seem as if this administration is obsessed with nullifying everything and anything passed by the Obama Administration?  Lightbulb regulations??!! Sure, why not? Fortunately, some states have a better idea.

The Department of Energy has proposed new regulations for lightbulbs that would eliminate efficiency standards for half the bulbs on the market [emphasis added].

He’s [Energy Secretary Rick Perry] just, you know, going along with the message from the top, said Rep. Paul Tonko (D-N.Y.), and it’s not innovative. It’s not committed to doing what’s best for the consumers or the environment. And I find that unacceptable.

The move has prompted a backlash from a bipartisan mix of state attorneys general and governors, who say it is harmful to the planet and may be illegal.

Washington and Colorado passed bills this month designed to backstop the Obama-era standards if the Energy Department proceeds to roll them back, and half a dozen other states are considering similar legislation. Vermont passed such a law as soon as President Trump was elected.  State leaders say they are fighting what they see as an alarming trend under the Trump administration where agencies with an environmental purview are instead rolling back green regulations.

It’s unfortunate if the Environmental Protection Agency doesn’t actually want to protect the environment or that the Department of Energy is not interested in energy efficiency, said Colorado state Rep. Meg Froelich (D), who sponsored the legislation to commit the state to the Obama-era standards for lightbulbs and other devices. We don’t want to become a dumping ground for energy inefficient appliances.

The administration proposal is supported by lightbulb manufacturers, but consumer groups estimate continuing to use less efficient bulbs will cost the average household more than $100 a year and create more pollution as utilities produce energy that otherwise would not be needed.

There are also questions about the legality of the rollback — federal law prohibits backsliding on efficiency standards, barring “decreases [in] the minimum required energy efficiency.”

Energy Secretary Rick Perry appeared to acknowledge as much in an appearance before Congress Thursday [May 9], telling lawmakers portions of the Obama regulation were burdensome but that “you can never back up a standard.”

There are about 6 billion lightbulbs used to power American homes. About 3.3 billion are the traditional, pear-shaped kind, while another 2.7 billion run the gamut of shapes and sizes.

It was under the George W. Bush administration that Congress first enacted standards for light bulbs in 2007, paving the way to phase out pear-shaped incandescent bulbs with more energy efficient ones.  Those incandescent bulbs, which create light through heat, put 70 percent of their electricity toward creating heat and just 30 percent toward creating light. They were rapidly replaced as more efficient fluorescent and LED bulbs came on the scene.

Under Perry, the agency’s standards would not change but regulations would only apply to pear-shaped bulbs.  Perry was pushed to defend the lightbulb rules by Democrats Thursday, with many lawmakers suggesting outside forces, rather than the Energy secretary, were pushing the rollback.

“He’s just, you know, going along with the message from the top,” said Rep. Paul Tonko (D-N.Y.), “and it’s not innovative. It’s not committed to doing what’s best for the consumers or the environment. And I find that unacceptable.”

Like Loading...
‹ Second Chance Month: Restorative Justice for all Virginians
A Culture of Fear Sustained by Political Rhetoric ›