Home › Issues › A Culture of Fear Sustained by Political Rhetoric

A Culture of Fear Sustained by Political Rhetoric 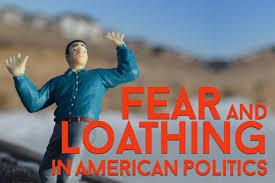 Southwest Virginia (SWVA) consists of 13 counties with two state senators and four state delegates. For decades, its economic vitality has suffered, especially due to the loss of the tobacco and coal mining industries. As a result, the area has also been plagued by out migration of its younger population, while those who remain age and require more intensive health care.

The Commonwealth has undertaken a number of efforts to reverse the economic decline, with mixed results. At the same time, the political rhetoric from SWVA leaders grows aggressively more discouraging, sometimes infantilizing. Sociologists and political scientists define a culture of fear as one creating a climate designed to achieve political gains through emotion and bias appeals to a populace. This was, of course, the essence of the “big lie” promoted by Adolph Hitler. His henchman, Hermann Goring, wrote:

All you have to do is tell them they are being attacked and denounce the pacifists for lack of patriotism and for exposing the country to danger.

Zbigniew Brzezinski observed that the phrase “war on terror” generated a culture of fear because “it obscures reason, intensifies emotion, and makes it easier for demogogic politicians to mobilize the public on behalf of policies they want to pursue.” And in large measure, these efforts are amplified by media. Are they effective?  Rod Rosenstein did not believe a “few ads on Facebook” by the Russian government would convince voters. But a vignette reported in The Washington Post (June 19, 2014) illustrates Goring’s and Brzezinski’s insight. The Post interviewed a number of SWVA residents to gauge opinions on health care in the region. One scenario played out as follows:

I’m scared of Obamacare. We’ve been hearing too many tales about it. We heard there’s doctors who get to decide. . . . Before she could utter “death panels,” her sister made a gun gesture with her hand and said, “Pow!”

On May 8, 2019, the Virginia Mercury, an online outlet reasonably new to Virginia and promising “a new look at the Old Dominion” on its masthead, published a report on a meeting of Republicans in Gate City, Virginia, convened to discuss the forthcoming 2019 General Assembly races. Two of its leaders and organizers—Terry Kilgore and Todd Pillion—are elected state legislative officials. Given the gravity of the economic plight of the region and in the context of the 2019 campaign, a reader might expect to learn of proposals to improve conditions, especially from the leadership in attendance.

Mr. Pillion (R–Washington County) told the audience that this election is certainly one of the most important in a generation because “we are one vote, one election, and one bill away from being New York and California.”  He followed this bit of wisdom with a comparison between Alexandria Ocasio-Cortez (“AOC”—a New York congresswoman) and Delegate Sam Rasoul of Roanoke, because he introduced legislation mirroring AOC’s Green New Deal for 100% renewable energy. Pillion cautioned listeners, without explanation, with the query:  “Can you imagine what that would do to our southwest economy.…?” With the threat of being a short hop from becoming New York or California, neither information nor imagination was required to understand the invited and intended negative reaction.

Mr. Kilgore (R–Scott County), a delegate since 1994, added that the 2019 campaign in SWVA was about “rural values” which, he asserted, included the Second Amendment and pro-life policies, as opposed to those in the rest of the state. Republicans had killed a $15/hour minimum wage bill in the Senate, although Kilgore noted that rural values included “you get a good job and you keep a good job.”

Perhaps the most glaring quality of the remarks of these two elected leaders was the absence of any affirmative or positive policy proposals.  Nor was there substantive criticism of, for example, the legislative proposal for a $15/hr. minimum wage.  That glare was amplified by the failure of the Virginia Mercury to call attention to that fact.

Too often, emotion—not policy considerations—rules voting. The messaging by the two Republican leaders was clear in segregating, perhaps dividing is a better term,  SWVA from the rest of the state along a bright line of “rural values,” opposition to a reasonable minimum wage, and development of alternative energy programs. This type of political rhetoric infantilizes voters while creating fear of “outside” influences, such as New York and California, as well as national figures like Alexandria Ocasio-Cortez. The words and language chosen are designed to appeal solely to emotion, while deflecting from substantive policy content. Denounce the proponents; intimate an attack; stimulate fear. The result:  “I’m scared of . . . ” and will therefore vote any way you tell me to in order to avoid it. Is it any wonder many folks vote against their economic interests?