Editors’ Note: This article, about Laura Copenhaver, an entrepreneur in the textile industry during the Great Depression, is authored by one of her descendants. Copenhaver is one of  a group of distinguished Virginia women to have a statue erected in Richmond; see https://voxfairfax.com/2019/10/14/virginia-women-in-history-feted-today-in-richmond/.

In addition: The William King Museum of Art in Abingdon, Virginia, will be hosting an exhibit about Laura Lu Scherer Copenhaver from now until September 13, 2020. It is called “superabundance”–a phrase coined by Sherwood Anderson. 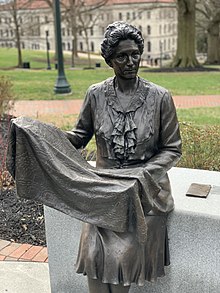 Born in Texas in 1868, Laura Lu Copenhaver was an American businesswoman who headed a textile company, and was also a writer and poet. The family returned to Virginia in 1871.
Growing up half my life in Marion, Virginia, I had always known Laura Lu Copenhaver’s family because we were all cousins and shared a genealogy in Smyth County. It was well known that Laura Lu’s daughter, Eleanor Copenhaver, had married the famous American writer Sherwood Anderson. I even remember their old homeplace “Rosemont” and was sad when it was razed. It was a grand Victorian home on Main Street right next to the old Marion College with a beautifully furnished interior.
The college had been started by her father, Rev. Dr. J.J. Scherer, of the Lutheran Church in town. To understand Laura Lu’s life work is to know the background of both sides of her family in Smyth County. I believe it is no accident that she became heavily involved in textiles; hopefully this story will tell you why.
I first came to examine Laura Lu when I was an operatic singer fresh out of Emory & Henry College. I had been asked by the Historical Society and the Annabelle Morris Buchanan Federated Music Club to give a series of concerts of Shubert/Schumann style high-art soprano songs of Ms. Buchanan (also in the Virginia Women’s Monument).
Included was Laura Lu’s hymn “Heralds of Christ,” found in Lutheran and Methodist hymnals. Later, when I became chair of the Frederick and Eve Phillippi Copenhaver Memorial Library Fund over the Southwest Virginia Heritage Room in the same library as the Sherwood and Eleanor Copenhaver Anderson archives, I discovered many more books surrounding her life. As we dig deeper into her past, a tremendous story emerges of this remarkable woman.
Like many other settler families of what would become Smyth County, Laura Lu’s ancestors came with Revolutionary War land grants of surveyed tracts. Across this valley lived many families well known to Southwest Virginia post-revolution history: the Copenhavers, Killingers, Prestons, Henrys, Russells, and Crocketts. One of the largest tracts of land was the Great Crab Orchard Survey. For over 100 years my own Copenhaver family has, and still farms, land from this survey under the name Crab Orchard Farms. Another such family was that of Laura Lu’s mother, Katherine Killinger. The Killingers were in an area west and slightly south of Marion in what is today Thomas Bridge. In 1858 Peter Killinger sold this land to Mr. Abijah Thomas, who built an octagonal house, which still stands on the National Register of Historic Places.
While Abijah Thomas had the land, he went into business creating a textile village between his house and that of Peter Ivanhoe Copenhaver. He purchased equipment for a weaving community for cotton and wool goods under the name Holston Mills (named for the Holston [also Holstein] River nearby). When Civil War became imminent he went into production of woolen uniforms for the soldiers of the county, such as James White and Preston Sheffey’s Smyth Dragoons. In fact, it was Stoneman’s Raid on Smyth County that made Laura Lu’s mother, Katherine Killinger, famous for rescuing the court papers from the burning courthouse. Later, as 1880 census and tax records reveal, Holston Woolen Mills employed mostly women. So the idea that women were capable of producing salable goods from local raw material was not a foreign one to Laura Lu. Her parents and the community at large would be familiar with this practice when Laura Lu began her extraordinary efforts.
In 1922 Laura Lu addressed the biennial convention of the Women’s Missionary Society on the need to minister to the people of Appalachia. Her speech inspired the society to create a committee to conduct mission work in southwestern Virginia. Also in the 1920s, recognized for her civic work, Copenhaver was encouraged to become a candidate for the House of Representatives, after women gained the right to vote. Writing anonymously in the November 1922 issue of Atlantic Monthly, she contemplated the idea but decided that she could not leave her family for politics.
Laura Lu’s father must have been inspirational in exemplifying the importance of education. He founded Marion College as the Reverend of Royal Oak Tract Lutheran Synod. Laura Lu herself taught at Marion College and saw the need for cooperative labor. So it is almost no surprise that after the Great Depression of late 1939, this enterprising woman began employing lady weavers in her home at “Rosemont” to make woolen coverlets of old patterns to fit many of the antique furniture pieces found in most homes. Eventually business expanded with catalog circulation, thanks to later efforts of her descendants Thom and Rita Copenhaver. The copy I have of this catalog is dated 1961 and includes this entry:

In a letter written by Lady Cynthia Colville to Miss Evans-Darby, who had given one of our Pine Tree Border coverlets to Queen Mary of England, is this paragraph: Her Majesty is delighted with the really beautiful coverlet. It is a very lovely piece of work, altogether unusually attractive and wonderfully executed.

Another lasting legacy to her endeavors is presently being revived at Konnarock Training School. As part of her missionary work with her cousin, Rev. Kenneth Killinger, a beautiful large, stone education building was built in 1925 and is a Virginia Landmark and on the National Park Service Register of Historic Places. It sits in a high junction near White Top mountain on a road that leads back to Thomas Bridge. Now the Blue Ridge Discovery Center, it maintains its mission of educating, celebrating, and empowering rural communities. Laura Lu passed away in 1940.
I actually have coverlet material (drapes and bedspread) from Rosemont Industries, given to me by my Great Aunt Roberta Copenhaver. True to form, it adorns a 100+- year- old family antique bed. I wish I had gotten to meet Laura Lu Scherer Copenhaver and her weavers in person. But for now, I will have to visit her in my hymnal on Sundays.