Home › Issues › It’s a Great Day for the Irish

It’s a Great Day for the Irish 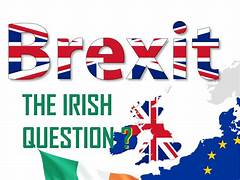 After centuries of colonial control, often marked by brutal treatment, and later faux home rule under the empire upon which the sun never set, Ireland has emerged as a figure in control of England’s future. The role reversal has come about because the Brits have allowed their politics to become warped and frozen in Brexit.

From its subjugation of the Emerald Isle to its greedy landlord system which spawned the Great Famine of 1847 and the Irish diaspora, few are unfamiliar with the Crown’s treatment of the Irish. While Jonathan Swift’s A Modest Proposal was created as nightmarish satire, the tale of using Irish children as meal time entrées was also understood to represent the character of British rule over its neighbor.

In 1922, following seven centuries of rule from London, the Irish Free State was born following a bitter guerrilla war fought by a citizen army against the formidable British military.  In 1948, the 26 counties declared themselves a fully independent nation to be known as the Republic of Ireland. Throughout, the several counties to the north continued as a ward of England, called Northern Ireland. Theirs is another story of colonial empire control exacerbated by religious strife as England continued its marriage with the Church of England as part of the royal theocracy and the civic state. With the Belfast (Good Friday) Agreement in 1998, the two Irish entities joined in a peace agreement that included the elimination of patrolled borders between the northern and southern counties. That event has now become a keystone to Ireland’s present blackball power over its former master.

The simplicity of the referendum failed to appreciate the broader implications of England’s four-decade relationship with its European counterparts in matters such as customs tariffs, travel for EU citizens, and other border security concerns.

Britain joined the European Union (EU) in 1973 and by referendum in June 2016 voted to secede from that agreement. The decision was cheered by US conservatives as a signal of the rise of populist national sovereignty and a stemming of the corridor of power from London to EU headquarters in Brussels. By a vote of 52-48 percent, Britain declared termination of its ties with the EU. But the simplicity of the referendum failed to appreciate the broader implications of England’s four-decade relationship with its European counterparts in matters such as customs tariffs, travel for EU citizens, and other border security concerns. It’s the border between northern and southern Ireland that now dominates attention between the two nations.

Northern Ireland was plagued by partisan and sectarian violence for decades prior to 1998  At the same time the six counties that constitute Northern Ireland remain tethered to the United Kingdom, they are also a symbol of Irish identity.  Colonial orthodoxy in England never was sensitive to cultural or language similarities in lands where the Union Jack was staked. Since the advent of the EU and the 1998 peace agreement, the two Irelands have experienced a robust economic boon as well as a borderless existence cultivating commerce and trade. With the Republic of Ireland remaining in the EU and Northern Ireland under British control and London’s Brexit mandate, the portent of a revived formal border along with tariffs between north and south becomes a reminder of a troublesome past and a present threat to prosperity.

The British government has been attempting to negotiate a smoother dissolution of its bands with the EU seeking to retain some benefits while eschewing others. To date, Brussels has rejected proposed plans. Some leaders, such as its present Prime Minister, Boris Johnson, have voiced favor of a “no-deal” Brexit, simply severing ties and trusting to the fates the outcome. Politically, the EU cannot stop England from a no-deal exit. But continued proposals and negotiations have reduced that debate to approval by Ireland for a civilized separation. And Ireland does not favor a border with Northern Ireland. In contrast, Johnson has authored a plan that would allow customs checkpoints between the two Irelands. Ireland’s prime minister has voiced clear opposition to Johnson’s plan and has received the support of EU officials.

Statements from Brussels have cited the core principle of the EU’s creation of free trade as an irreducible standard. One spokesperson said:

Solidarity is at the heart of what the EU is about. The smaller you are, the more you need it.

Ireland’s struggle for independence and freedom is not unlike that of the United States’ dissolution of its “political bands” from Britain and many parallels can be drawn. Seven decades from its emergence as the Republic of Ireland, the nation has taken full advantage of its membership in the EU and constructed a dynamic financial infrastructure to the advantage of its populace. At the same time, it has forged deep alliances across the globe.  The once all-powerful United Kingdom has, in fact, seen the sun recede across its empire and, in the case of Ireland and Scotland, within its immediate environs. Certain in its political calculus is a fear of the loss of Northern Ireland in a union with the Republic. Colonial empire egos remain fragile even in this modern age.

The Irish are effectively exercising a blackball in England’s attempts to secede from the EU with or without some measure of face-saving and economic security. Nor has the Republic of Ireland expressed any glee at the position it finds itself enjoying at the expense of its former master. It seems certain, given the history,  that many pints of Guinness are raised in pubs with a smile, a wink, and the sentiment that “It’s a Great Day for the Irish.”