Overturning the Supreme Court’s 1973 decision would not be “pro-life.” It would be destructive of life. 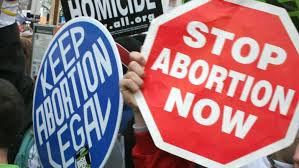 For more than 30 years I worked to overturn Roe v. Wade. As an evangelical minister, I was deeply engaged in the world of the religious right, beginning with my vote for Ronald Reagan for president in 1980. I believed he would appoint Supreme Court justices committed to protecting unborn children, and Antonin Scalia, appointed in 1986, fulfilled my expectations. Later, when President George Bush nominated to the court another strong pro-lifer, Clarence Thomas, I led a vigil at our church to pray for his confirmation.

During those years I also recruited, trained and directed thousands of protesters who blocked the doors to abortion clinics, marched in the streets to denounce “baby killing” and staged sit-ins at the offices of legislators. I was a leader of Operation Rescue, the activist pro-life group; I helped stage the epic 1992 anti-abortion demonstrations in Buffalo. I went to jail and paid exorbitant fines for my advocacy, and was even arrested by the Secret Service for my role in thrusting an aborted fetus at Gov. Bill Clinton during his 1992 presidential campaign. Eventually, I founded a national organization to advance the anti-abortion agenda.

Given my history, you might think I would be thrilled at the perilous threshold at which Roe now stands, following the passage of sweeping new abortion restrictions in such states as Alabama, Georgia and Missouri. I’m not.

Over the last decade, I have changed my view on Roe. I’ve come to believe that overturning Roe would not be “pro-life”; rather, it would be destructive of life…. If Roe is overturned, middle- and upper-class white women will still secure access to abortions by traveling to states where abortion is not banned, but members of minorities and poor whites will too often find themselves forced to bear children for whom they cannot adequately care.

What is “pro-life” about putting a woman in a situation where she must risk pregnancy without proper medical, social and emotional support? What is “pro-life” about forcing the birth of a child, if that child will enter a world of rejection, deprivation and insecurity, to say nothing of the fear, anxiety and danger that comes with poverty, crime and a lack of educational and employment opportunities?

Consider the situation in Alabama. The Alabama Senate approved a measure this month that would outlaw almost all abortions in the state. I know Alabama well. I was arrested and served jail time there for my activism in the early 2000s. While being processed and incarcerated, I met men and women — primarily members of minorities and poor whites — whose daily lives consisted of one crisis after the next. Many of them lacked even the most rudimentary life skills, including what it takes to raise a child. They were in a state of perpetual panic about money, about the bewildering circumstances they found themselves in, feeling victimized by their very existence. Some spoke to me of their children, agonizing over how helpless they felt in providing anything for them.

The experience left me feeling hollow inside. Alabama does have a network of “crisis pregnancy centers,” which offer support for women and their babies. But that support is limited, and should Roe be overturned, those centers will be woefully insufficient to help these women and their families raise and care for their children.

I’d like to think that the churches and pro-life organizations I worked with for those 30 years would provide the necessary tens of millions of dollars, thousands of volunteer hours, extensive social services, medical and dental care, educational support, food, clothing and spiritual assistance. But I suspect — frankly, I know — that they cannot or will not.

No doubt, many of my former allies will call me a turncoat. I don’t see it that way. I still believe that every abortion is a tragedy and that when a woman is pregnant, bringing the child into the world is always ideal. Reality, though, is different from fantasy. I wish every child could be fully nurtured and cared for, and could experience all the wonderful possibilities that life can offer.

But that is not how things turn out for every mother and child. As I’ve preached countless times, loving our neighbors means meeting them where they are, not where we want them to be.

I can no longer pretend that telling poor pregnant women they have just one option — give birth and try your luck raising a child, even though the odds are stacked against you — is “pro-life” in any meaningful sense. And when this message is delivered to poor women by overwhelmingly middle- or upper-class white men (as most of the legislators passing these laws are), it adds insult to injury.

To my former allies who are cheering on the challenges to Roe, I say: Put your money where your mouth is. Devote yourself and your considerable resources to taking care of poor women and their children before you champion laws that hem them into impossible situations.

Otherwise, you are violating the Bible you purport to obey. In the New Testament’s Book of James we read, “If a brother or sister is poorly clothed and lacking in daily food, and one of you says to them, ‘Go in peace, be warmed and filled,’ without giving them the things needed for the body, what good is that? So also, faith by itself, if it does not have works, is dead.”

The admonition doesn’t end there. The Book of James goes on to call such a perpetrator of fake religion a “fool.”

Passing extreme anti-abortion laws and overturning Roe will leave poor women desperate and the children they bear bereft of what they need to flourish. This should not be anyone’s idea of victory. Anyone who thinks otherwise is indeed a fool.