Home › Issues › How Absolute is the Right to Vote?

How Absolute is the Right to Vote? 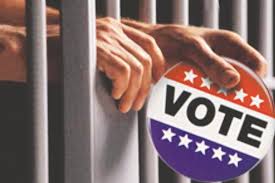 The right to vote is not absolute across all members of our society. Individuals under the age of 18 and those deemed mentally unfit are precluded from voting. Attention lately has been focused on the disenfranchisement of felons, both those who have served their sentences and those presently incarcerated or on parole or probation.

A few years ago, when Virginia Governor Terry McAuliffe sought to enfranchise all ex-felons as a class, opposition was swift and sweeping. However, a review of the media coverage of that time fails to reveal a discussion of the public policy reasons for removing the right to vote. That absence applied to ex-felons and those incarcerated.

Maine and Vermont do not disenfranchise incarcerated individuals, and there appears to be no adverse effects from this public policy. Naturally, this raises questions about the policy behind disenfranchisement. The simple question is, Why do we do it? What difference would it make were such individuals allowed to vote?

Historically, felon disenfranchisement was codified as a carryover from English law and reinforced subsequently under Jim Crow statutes. At the same time, society has tended to ignore alternatives to its retributive justice system in a kind of “out of sight, out or mind attitude.” These factors have come under renewed examination as the nation’s prison, parole, and probation components have become increasingly populated by more and more persons of color.

Society should not permit the vote to persons who break the law, allowing them to vote for those who make the law and then only after they demonstrate a rehabilitated view.

At best, this is a moral imperative without cognizable goals or objectives other than to perfect the definition and identification of social outlaws. The rationale presents no social or political purpose to encourage rehabilitation of felon conduct and restoration to participation in the civic culture.

Recently, Senator Bernie Sanders proposed to eliminate felon disenfranchisement in the United States. Pundit response was predictable. On CNN, anchor Chris Cuomo queried whether this would apply to someone such as the Boston Bomber. Sanders said Yes. President Trump, also citing to the Boston Bomber, said “I don’t think so.” Again, neither referred to a public policy reason to support their position.

Subsequently, Senator Sanders retorted with other names who should not be disenfranchised: Michael Cohen and Paul Manafort. That list could be extended ad infinitum to include those convicted of the most heinous of crimes to those convicted of the least of felonies. The Cuomo/Trump observation justifies disenfranchisement on the basis of the violence or horror of the crime for which conviction followed. Upon examination, there remains an absence of a clear social political objective in the practice. No persuasive answer is evident as to why the right to vote should be denied felons or ex-felons. To many, it seems to be simply a gut reaction.

The majority view understands that, under our Constitution, voting is not an absolute right or privilege, but where limitation of voting presents no defensible rationale, restrictions such as disenfranchisement seem unnecessary.  As Chief Justice Earl Warren noted in 1958, “Citizenship is not a right that expires upon misbehavior.”

Like Loading...
‹ In Memory of John Mitchell
Arlington County: Home of the Only Juvenile in the Country Sentenced to Life Without Parole for Robbery ›