October 23, 1983:  Terrorists drive a truck loaded with TNT into the US and French headquarters in Beirut, Lebanon, exploding it and killing 241 US Marines and 58 French paratroopers.

October 27, 1978:  The Nobel Peace Prize is awarded jointly to Menachem Begin of Israel and Anwar Sadat of Egypt.

October 28, 1886:  The Statue of Liberty is dedicated in New York Harbor. The statue was a gift from the people of France commemorating the French-American alliance during the American Revolutionary War. The structure stands 300 feet tall. The pedestal contains the words: Give me your tired, your poor, your huddled masses yearning to breathe free, the wretched refuse of your teeming shore. Send these, the homeless, tempest-tost to me, I lift my lamp beside the golden door!

October 28, 1962:  The Cuban Missile Crisis ends with the announcement by Soviet Russia’s leader Nikita Khrushchev that his  government was halting construction of missile bases in Cuba and would remove the offensive missiles. President Kennedy immediately accepted the offer and lifted the U.S. naval blockade of Cuba. 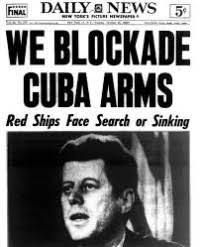