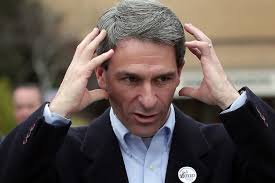 Ken Cuccinelli, President Trump’s acting director of US Citizenship and Immigration Services and one in a long list of the administration’s acting, unconfirmed top officials, wasted precious little time before uttering Trumpian policy, speaking the wisdom he gained in Virginia concerning immigration issues.

In an interview with CNN, the “Cooch” characterized the death of the immigrant father and daughter who drowned in the Rio Grande attempting to enter the US as “poor decision making by the parent.” Under the administration’s “metering” procedure for asylum seekers, applicants must wait in Mexico because the US does not have the facilities to accept them on US soil. The “metering” was created to limit the number of asylum applicants. Of course, there is no waiting list that holds one’s place in the process; so wait time can be permanent.

During the interview, Cooch stated

The reason we have tragedies like that on the border is because those folks, that father, did not want to go through the asylum process in the legal fashion. . . .

There was no mention by the acting director about the existence of bilingual signs at the border advising asylum seekers of the steps in the process or the amount of wait time to complete an application. But that’s only because none exists.  Likely that advertising material will be produced and established following the appropriation by Congress of the $4.6 billion requested by the administration.  Then, “those folks” will have been warned and their decision making enhanced.

The nation is fortunate to be able to count upon experienced individuals such as Cooch, said experience in immigration honed and forged in Virginia. Simon and Garfunkel may be prompted to revise some lyrics to Mrs. Robinson:

The Commonwealth may be lucky for the time being, but it can look forward to a vastly more mature Cooch in the future, who no doubt will be able to contribute to Virginia’s unyielding immigration problems.