Home › Issues › Fall of a Titan

Fall of a Titan

Flying Blind: The 737 MAX Tragedy and the Fall of Boeing, by Peter Robison

[Reviewer Note: A longtime aviation aficionado, I was drawn to this book for a deeper examination of the two well-known crashes: why did they happen? Why should you read it? To understand the myriad interrelated factors that contributed to this whodunit/whydunit/howdunit . . . and what they continue to say about our society.]

Yes, I feel a connection to Boeing. But it does not at all make me want to excuse the many mistakes the company made over the past half-century or more; rather, it makes me angry. And sad. It didn’t have to be this way.

Flying Blind is written like a mystery novel, and effectively so. There were definite heroes and villains. And even though we know the ending, how it happened is described in riveting prose and detail, weaving in the human lives lost. It almost becomes a parable, a warning of the effects of hubris. A morality play, if you will—one that cost 346 people their lives because those who ran Boeing began to worship at the altar of the almighty dollar.

To be sure, Boeing is still an excellent, viable, financially solid company, though steadily losing market share to Airbus Industrie, a joint venture of France and Germany—and, importantly, funded by those governments. But Boeing’s early culture of engineering excellence is, unfortunately, long gone, replaced by an emphasis on shareholder return at all costs. So Boeing’s decline did not follow the 737 MAX crashes of 2018 and 2019; rather, it foretold them.

The beginning of the end of Boeing being a company that focused first and foremost on engineering came in 1997, when it merged with McDonnell Douglas.

The beginning of the end of Boeing being a company that focused first and foremost on engineering came in 1997, when it merged with McDonnell Douglas. As it happened, executives at both companies were longtime admirers of Jack Welch and what he built at General Electric. And he did it by putting shareholder return above all else, including customers and employees. But this was never how an airplane manufacturer operated—until now. 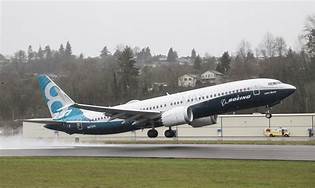 During development of the MAX, the mantra was more-cheaper-faster. When engineers raised potential safety issues, they were downplayed, especially if the cost to correct them was too high. In fact, the MAX project was seen as a “quick and dirty” update of the original 737; Boeing did not want to spend the money for a totally revamped new plane, especially while in competition with Airbus. One outcome of this was that, to save money, Boeing steadfastly held to a policy that pilots would not need simulator training on the new plane, only a brief iPad review.

This turned out to be a critical error. The new software that brought down both the Lion Air and Ethiopian Airlines flights, MCAS (Maneuvering Characteristics Augmentation System), was never even included in the MAX’s training manual. In effect, this new software told the plane to override pilot attempts to prevent the aircraft from hitting the ground (or water), ostensibly to keep it from wildly pitching up. But sensors on which MCAS relied could be–and were–faulty.

To add insult to injury, Boeing’s relationship with the Federal Aviation Administration was becoming the reverse of what “oversight” is supposed to mean. FAA delegated authority to Boeing to basically oversee and approve its own work. Further, FAA managers reported to Boeing supervisors, and their compensation was tied to Boeing’s meeting its production milestones. What could possibly go wrong?

As with the Morton-Thiokol accident on the Challenger in 1986, human factors are very much at the heart of these disasters. Plain to see in hindsight but buried while happening, if one chooses not to look. The last line of the book quotes an engineer as saying, “Boeing got away with murder.” Even with Department of Justice and congressional oversight–and being pushed off the front pages of newspapers by Covid–it is basically true.

The MAX remains the only large commercial airliner without an electronic checklist to guide pilots. I won’t fly on it.