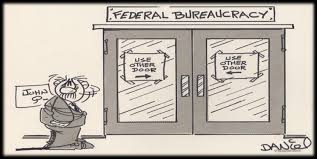 News junkies would be hard pressed to recall praise from an elected official over the work of a federal bureau. Sometimes, and sometimes not, during hurricane season, FEMA is lauded for its relief and rescue efforts. However, a walk through the aisles of a supermarket where virtually every product bears some approval by a federal agency does not produce a cheer.

Bureaucrats in the main are negatively criticized and too often get a bad rap. But without a bureaucracy, our government and our society would simply cease to function. Government agencies are necessary to protect us from unbridled private-sector greed and lax implementation and oversight of safety issues. While caveat emptor ruled the Roman Empire, it is insufficient to afford broad-scale protection for the public in a complex economic system serving 325 million people. Bureaucracies efficiently carry out the policy directives that result from law, the mandates of the American electorate made in choosing legislators and a president.

Without a bureaucracy, our government and our society would simply cease to function. Government agencies are necessary to protect us from unbridled private-sector greed and lax implementation and oversight of safety issues. While caveat emptor ruled the Roman Empire, it is insufficient to afford broad-scale protection for the public in a complex economic system serving 325 million people.

Conservatives generally deplore bureaucrats as a matter of ideological faith—“unelected” (obviously) bureaucrats who arguably take it upon themselves to act in ways that are counter to the public’s and nation’s interests. In recent years, bureaucracies have been demonized as part of the “deep state”, allegedly blocking efforts of a presidential administration’s mandate from the electorate. These criticisms often voice the complaint that bureaucrats are “making policy” and are anti-business because costs are added to the sale of goods.

Max Weber, sometimes called the Father of Bureaucracy, was  a German historian and political economist who is regarded as one of the most important theorists on the development of modern Western society. His “rational-legal” model of bureaucracy explains that it is “based on the general principle of precisely defined and organized, across-the-board competencies of the various offices” that are “underpinned by rules, laws, or administrative regulations.”

In particular, Weber notes three aspects that “constitute the essence of bureaucratic administration” in the public sector:

While critics chafe at “unelected bureaucrats” whose tasks are to formulate governmental regulation, that is exactly what they are supposed to do. The conduct is neither personal nor acting on their own, except where the law provides discretionary judgment; rather, their acts are according to US laws, passed by Congress and signed by the President. In fact, all federal agencies are bound to follow the Administrative Procedures Act of 1946, adopted in response to FDR’s New Deal agenda.

It would seem that critics cry foul when such bureaucrats, following the law, take actions such as releasing prisoners from jail, holding meatpacking plants responsible for dangerous safety breaches, or enforcing regulations on clean air—the kinds of things Republicans believe should simply be market-based, with no governmental interference.

Caveat emptor protects no one but the producer. Are you not more comforted that the Federal Aviation Administration monitors airline safety? Or that an Agriculture Department inspector certifies milk pasteurization? And how about those people making sure your Social Security check arrives—on time and in the correct amount—each month?

Sometimes, of course, “bureaucrats” can get it wrong—unintentionally or as a result of political interference. Mining regulation has a long history of interference from the Interior Department as a result of pressure from mine owners, so that the safety of miners sometimes got short-shrift. And various branches of the government may even be working at cross-purposes: a Commerce Department office may favor a trade agreement with another country that the State Department opposes. But that’s why we have a White House. And of course there are essential agencies central to the welfare of our country and without which America would simply not work or benefit its citizens, such the Defense Department, Treasury, and State.

A further check is the federal Administrative Procedure Act (1946), a federal statute that governs the way in which administrative agencies of the federal government may propose and establish regulations, and grants US federal courts oversight over all agency actions.

In addition, the government has its own internal watchdog to ensure that officials are doing their jobs correctly—the Government Accountability Office (GAO). [See VoxFairfax, “Fail-Safe Accountability,” June 15, 2020; https://wp.me/p9wDCF-1sH.] Agencies likewise have their own offices of inspector general, which investigate reported wrongdoing internally. The watchdog functions receive little credit from the critics.

Perhaps more dangerous is the recent legislation passed in Georgia to deform its voting procedures and agencies allowing a partisan state legislature to reverse the popular vote of the electorate.

States, too, may be subjected to charges of bureaucratic fumbling. With states setting varying rules related to Covid-19, the current administration has tasked the Occupational Safety and Health Administration (OSHA) with coming up with a national rule to keep all Americans safe in the workplace. Perhaps more dangerous is the recent legislation passed in Georgia to deform its voting procedures and agencies allowing a partisan state legislature to reverse the popular vote of the electorate. That drama will draw intense examination as a classic example of manipulation of the rules of governance.

Steve Bannon, one-time consigliere to the 45th president, promoted the radical theory that government agencies–the administrative state—are an unnecessary convention and citizens would be freer if the administrative state withered away. It does not require deep reflection or analysis to appreciate that such a theory is bunk. Society and its citizens would essentially be defenseless, subject to dangerous working conditions and unsafe products. Mr. Bannon is free to live that way but, as a practical matter, he is in error to insist on the same for us all.

Be careful what you wish for, Mr. Bannon.