Turning The Rule Of Law Upside Down

The Tazewell County, Virginia, Board of Supervisors recently jumped aboard the fast-moving “Second Amendment sanctuaries” train. In doing so, they embraced positions fundamentally at odds with state and federal constitutional law. Passing resolutions opposing certain laws or protesting governmental action is perfectly consistent with our traditions as a democracy, and no one should oppose the rights of citizens and their representatives to speak their minds. But Tazewell, and a number of other localities across Virginia, want to do much more. As Eric Young, an attorney and the county’s Administrator, put it, “our position is that Article I, Section 13, of the Constitution of Virginia reserves the right to ‘order’ militia to the localities; counties, not the state, determine what types of arms may be carried in their territory and by whom. So, we are ‘ordering’ the militia by making sure everyone can own a weapon.” Other counties are announcing different schemes if gun safety laws are enacted: for example, the Culpeper County sheriff pledged to deputize “thousands of citizens” so they can own firearms.

[Editors’ Note: As of December 13, Virginia had 89 counties, cities, or towns declaring themselves second amendment “sanctuaries.” But Governor Northam was having none of it, stating, “If we have constitutional laws on the books and law enforcement officers are not enforcing those laws … then there are going to be consequences.”]

Conservatives have railed for years against so-called “sanctuary jurisdictions,” criticizing localities that refuse to cooperate with federal immigration policies they deem heartless and ineffective. In the past year, however, some conservative lawmakers have taken a page from the progressive playbook, employing sanctuary imagery in opposition to gun safety legislation they deem to be an unconstitutional restriction of their rights under the Second Amendment. 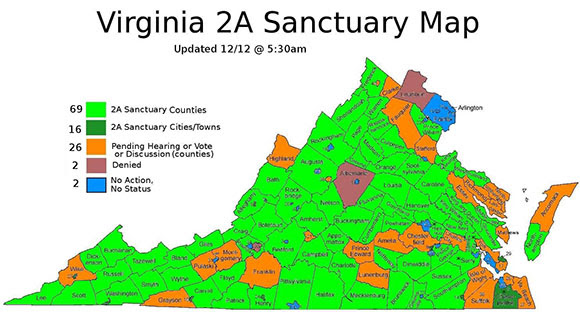 The two approaches are classic cases of false equivalency.

The two approaches are classic cases of false equivalency. Jurisdictions that proclaim themselves sanctuaries for immigrants do not seek to violate the law; they simply refuse to engage local law enforcement in supporting actions that are federal responsibilities. They do not block the law, but simply insist that it should be enforced by those who have the responsibility to do so. For some proponents of so-called gun sanctuaries, however, the goal is to prevent enforcement of state law that the jurisdiction (not a court) deems unconstitutional.

After Democrats won majorities in both chambers of the Virginia General Assembly, fears of stricter gun regulations have inspired a rise in Second Amendment sanctuary activity in Virginia. Sanctuary efforts are driven mainly by the Virginia Citizens Defense League, a gun rights group to the right of the NRA.  My office’s analysis of recent news accounts indicates that before November 5, just one county had passed a resolution; since the election, at least 80 localities (counties, cities, or towns) have passed some form of sanctuary resolution, and as many as 34 more are considering their adoption.

A REBELLION EMERGES
Second Amendment sanctuaries exploded onto the national scene in early 2019 after newly-elected Democratic Gov. J.B. Pritzker pledged to pass gun safety measures in Illinois. Within months, 64 of the state’s 102 counties passed sanctuary resolutions. After New Mexico expanded background checks in 2019, 30 of 33 counties declared themselves Second Amendment sanctuaries. Similar actions have either been taken or are under consideration in Colorado, Oregon, Washington state, and now Virginia.

In some cases, these resolutions simply register an objection to any infringement on gun owners’ rights. But some Virginia localities have gone further, indicating that they will not enforce state law that they deem unconstitutional. Some proponents have even resurrected words like “nullification” and “interposition,” terms first used extensively by Southern secessionists prior to the Civil War, and more recently during the “massive resistance” to federal laws requiring desegregation in the 1960s. They argue that constitutional officers in Virginia, such as Commonwealth’s Attorneys and Sheriffs, have discretion not to enforce laws that they consider “unconstitutional.”

FLASHPOINTS IN THE CULTURE WARS
The emergence of these sanctuaries demonstrates a growing rift in our nation. For residents in many rural areas of our country, guns are viewed as part of their way of life, one some fear that they will lose due to national and state changes. Most gun owners are law-abiding citizens, and any effort to limit anyone’s access to firearms is perceived as a direct attack on many things that they hold dear. During the Obama years, the manufacture and purchase of firearms increased in dramatic numbers in part due to unfounded fears that the government would try to take away guns. Voting to declare themselves “sanctuaries” is a way they can reassert some control over events that they feel are putting them at risk.

At the same time, the general public is increasingly supportive of certain gun safety measures. An April 2018 poll found that 85 percent of registered voters support laws that would “allow the police to take guns away from people who have been found by a judge to be a danger to themselves or others” (71 percent “strongly supported”). These measures, called Emergency Risk Protection Orders (ERPO), or “red flag” laws, create judicial procedures by which persons with serious mental health challenges deemed a threat to themselves or others can have their weapons removed until their situation is resolved; courts can be engaged to protect the rights of the accused. And a March 2019 Quinnipiac poll reported that 93 percent of American voters support a bill that would require “background checks for all gun buyers.”

The energy behind support of gun measures like “red flag” laws is generated by concern for mass shootings, which are statistically rare but dramatic in their public impact, and the increasing numbers of gun-related suicides, which impact families and communities in quiet but devastating ways. On the latter front, there is a certain irony that some communities which have embraced Second Amendment sanctuary status also have higher gun suicide rates than other communities in their state. In Colorado, for example, nine of the 10 counties with the highest suicide rate over the past 10 years have declared themselves “Second Amendment sanctuaries,” many after the state passed an ERPO law in 2019.

Even former Supreme Court Justice Antonin Scalia … noted, the right secured by the Second Amendment is not unlimited.

Recent polling in Virginia tells us that citizens of the Commonwealth are in step with the national trends documented above: Roanoke College’s Institute for Public Opinion Research recently released polling results which show that 84 percent of respondents favor universal background checks, and 74 percent support allowing a family member to seek an ERPO (Extreme Risk Protective Order) from a court.  Yet in the very same pool of respondents, 47 percent believe it is more important to protect the right to own guns than to control gun ownership.  But even former Supreme Court Justice Antonin Scalia might have had problems with some of the arguments being advanced by proponents of sanctuaries. “Like most rights,” he wrote in District of Columbia et. al. v. Heller, “the right secured by the Second Amendment is not unlimited. In short, rights under the Second Amendment have never been absolute.  And under both the national and state Constitutions, our courts are tasked with determining the constitutionality of laws—not local sheriffs.

HOME RULE VS. DILLON RULE
Proponents of Second Amendment sanctuaries have another problem in Virginia; the Commonwealth is what we call a “Dillon Rule” state. This means that if a power is not specifically permitted to a locality, state law rules. Progressives have been especially critical of Dillon Rule arguments in years past, believing that they have prevented localities from enacting policies—from local minimum wage ordinances to gun prohibitions—that seek to go further from state law. They have rarely been concerned that more conservative localities, if granted greater “home rule,” might enact policies, such as environmental regulations or building codes, that are more lax than state law. The Second Amendment sanctuary rebellion may prompt some to reexamine their views about how much additional power should be granted to localities.

The Virginia state legislature will soon consider several major gun safety measures, and opponents will likely strongly resist; as one county supervisor has said, “[W]e need to show them a crowd like they have never seen. They need to be afraid and they should be afraid.” Legislators should always be attuned to any unintended consequences of the laws that they pass; that is one reason why we have a deliberative process before bills are passed. But to leave the determination of whether to enforce duly-passed laws totally in the hands of sheriffs and local officials with discretionary power to determine their constitutionality is to turn the rule of law upside down, and is a direct attack on republican government and the Constitution itself.