Citizens United May Have United Citizens 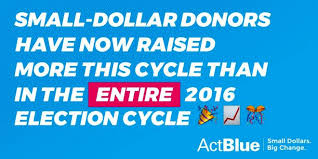 accompanying post from The New York Times (Republicans Will Lose The General Assembly) focuses upon the gun control issue as it will play out in  Virginia’s 2019 legislative campaign. But there are some other promising signals—perhaps incipient but crucial nonetheless—in play hinting that the Commonwealth’s election cycle this year for all 140 seats in its General Assembly display another set of political dynamics that will also cast Virginia as a bellwether jurisdiction for 2020.

It may be of some interest to Virginians that the Citizens United organization counts two members of its Board identified as residents of the Commonwealth, including Ron Robinson of Reston, who serves also as President of Young America’s Foundation, formerly Young Americans for Freedom. But first, let’s take a brief look back at the decision itself and its aftermath.

Citizens United v. Federal Election Commission (CU) (2010) has been in effect for just under 10 years, overturning the Bipartisan Campaign Reform Act of 2002, better known as the McCain-Feingold Act. A major effect of CU was to permit unlimited corporate, PAC, advocacy organizations, and union funding of political campaigns and activities. Upon examination, the majority decision is an exercise in libertarian judicial philosophy and reasoning. However, the four-member minority led by the recently deceased Justice John Paul Stevens were keenly aware of the deleterious implications of the majority’s rationale, especially upon popular democracy.

Stevens pointed out to his colleagues that the removal of corporate limits, for one, ignored the interests of shareholders who were in no position to oppose a corporate decision to contribute, given the very nature of the shareholder relationship to the company. This fear was absorbed by the general voting population, further contributing to concerns about the futility of popular participation in political campaigns. Most are familiar with the gobsmacking statement of Mitt Romney, “Corporations are people, my friend!” Common sense contradicted Romney and the Court’s decision. Others will recall Justice Samuel Alito’s shaking his head during President Obama’s 2010 State of the Union address when he criticized the CU decision.

The commonly accepted sense of the outcome of CU was that it gifted big money donors with the unlimited ability to affect and control the nation’s political life and that it permanently eclipsed individual participation in the political process. It may be that neither result is true or permanent.

The Tea Party entered the national political scene in 1990 as an alternative to frustrated conservatives within the GOP disappointed with failure to achieve promised political goals. The Tea Party proved to be significantly effective in changing the GOP and in electing candidates. Later in the 1990s and into the early 2000s, contemporaneous with CU, a number of online, grassroots advocacy organizations emerged (MoveOn, Daily Kos, Change) as focal points to stimulate liberal political participation in the nation’s civic culture, sometimes raising money for causes they championed. In 2004, a couple of activists created ActBlue as an online technology tool to “empower small dollar donors” to contribute to progressive causes and to Democratic candidates. In 2018, ActBlue boasted having raised $1.6 billion from 4.9 million donors in support of 14,280 different candidates.

Thus, while Virginia’s Blue Wave of 2017 and another one possible in 2019 may be linked by pundits as spurred by the election of Donald Trump in 2016, the tidal wave of fundraising by Dems using ActBlue and “boots on the ground” organizing signal a more organic outpouring than a reaction to the current White House occupant. Data published by the Virginia Public Access Project (www.vpap.org/visuals/) offer a picture of other dynamics, suggesting that in the coming 2019 and 2020 election cycles in Virginia, it may, in fact, be a bellwether.

VPAP’s graph for voter registration shows that, in the first half of 2019 (January 1–June 30), compared with 2015, a far higher rate of registration is unfolding. In June 2015, almost 13,000 voters registered, while some 22,000 enrolled in June 2019. For the most part, the state’s population growth in the same period has been relatively flat. Over this period though, female registrants are only slightly higher than male.

In the same 6-month period in 2019, 61,342 small-dollar donors (less than $100) gave to Democratic candidates seeking the 140 seats in the Virginia General Assembly, while the GOP counted only 7,709. While it is true that a portion of the Democratic contribution (45%) originated out of state, the native share was 33,700—nearly 4.5 times that of the GOP’s performance. This metric has become a bragging right for the national Democratic candidates to proclaim which candidate received the first 1 million donations.

At the same time, an increasing number of Democratic candidates in the Commonwealth are refraining from acceptance of corporate contributions in further recognition and rejection of the CU effect. The 45% out-of-state contributions are virtually entirely due to ActBlue’s broad network and, at the same time, recognition among non-Virginia donors that the Commonwealth represents a vital tipping point jurisdiction.

Not to be left in the dust, the national GOP has announced the creation of WinRed to mimic ActBlue. Perhaps due to the party’s traditional adherence to an ideology of competition, fierce infighting has emerged among its leadership and existing vendors to gain control of the fundraising function. One national leader characterized WinRed as “Obamacare for GOP fundraising.” The incumbent President announced the creation of WinRed in a press release at the end of June 2019. If WinRed gets off the ground, it will be instructive to see the comparable data for GOP small-dollar donors.

At present, Virginia’s 2019 odd-year campaign for the 140 General Assembly seats may indeed be a bellwether for more than the gun control issue, and set a promising path to 2020 for Democrats. At the same time, the confluence of voter registration and fundraising dynamics suggest that citizens are uniting to moot Citizens United.  Corrective legislation may not be that far into the future.