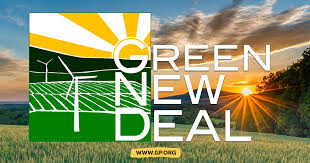 Last week, VoxFairfax posted an article (A Culture of Fear Sustained by Political Rhetoric) examining statements by two GOP political leaders in Southwest Virginia (SWVA) and the failure of reporting media to present balancing information concerning those statements. Lest readers conclude that we are partisan, we came across a similar occurrence involving a Democrat running for the Senate. The topic was the Green New Deal (GND), identical to one in SWVA.

First, however, a bit of background. On February 7, 2019, shortly after the GND legislative proposal was floated by Democrats, Fox News issued a news report criticizing its objectives and goal to achieve 100% renewable energy by way of employing wind and solar power among others. It may be that the Fox author is a flat-earther to pronounce the following:

Whether apocryphal or not, most folks are familiar with the story of Ben Franklin flying a kite in a thunderstorm to verify that lightning was indeed electric. Of course, it is a truism that the wind isn’t always blowing, but, even at night, wherever you stand, the sun is shining. It shines when clouds cover the visible sky. The delivery systems for both wind and solar energy include storage capacity for subsequent delivery when either source is limited by meteorological conditions.

Notwithstanding science and engineering, the Fox report concluded that “Electric power brownouts and blackouts would likely become common.” Ostensibly, “would” offers some deniability or wiggle room along with “likely.” No matter, because the talking points of the report became conservative mantra for that echo chamber to regurgitate over many news cycles.

Fast forward a few months to April 7, 2019, and a League of Women Voters (LWV) candidate forum where Virginia Senator Dick Saslaw appeared in his campaign effort for re-election. The following exchange took place:

LWV:      What legislation would you introduce to reduce greenhouse gas?

Saslaw:  This talk about this so-called Green New Deal that’s fine by 2030 if you don’t mind being without electricity about 16 hours a day.    (https://youtu.be/rtgwL7qzdaM?t=1920)

Of course, it is not necessary or even desirable to believe all Democrats should adhere to a party line or ideology. Here, the candidate not only deflects from the question but parrots the ideology of the opposition. Employing the term “so-called” further denotes that the GND is hollow or, at least, a questionable idea. Most crucially, though, is the fact that the response appeals not to reason but to fears that are unfounded and unspoken. One might guess that the sun failed to shine on that day or that the auditorium was in darkness due to power failure. In any case, such an appeal to fear, absent substantial evidence, is both insulting and infantilizing to voters, as well as a dereliction of a candidate’s responsibility to educate.

All voters expect some fluffery and puffery from candidates but they also expect straight talk and are entitled to being regarded as reasonable and rational without a speaker’s resorting to fear. Sadly, as we noted, the fear disease infects politicians in both parties. And perhaps it’s Saslaw himself who is running scared.