Home › Issues › ‘Citizenship Is Not a Right That Expires Upon Misbehavior’

‘Citizenship Is Not a Right That Expires Upon Misbehavior’

Editors’ Note: This article is based on POLITICO Magazine’s “Why Prisoners Deserve the Right to Vote,” by Corey Brettschneider, published June 21, 2016. 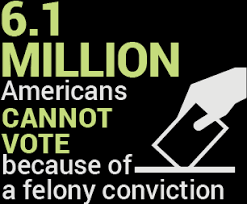 On April 22, 2016 Virginia Gov. Terry McAuliffe issued a sweeping executive order that changed the lives of 200,000 ex-felons in Virginia, instantly restoring their right to vote. This order leaves only Kentucky and Iowa with blanket lifetime disenfranchisement policies for ex-felons. In these states, no citizens convicted of a felony are allowed to vote, regardless of the crime committed, absent government-granted exceptions to the policy.

Governor McAuliffe’s act is a reminder that public support for giving ex-felons the right to vote after prison is significant, and growing—but this type of order doesn’t go far enough. Ex-felons should be able to vote, yes. But so should prisoners themselves.

To some, the idea may seem risky, unnecessary, or even unconscionable. But in fact, there are good reasons to embrace it. For one, our constitutional ideals support the right of prisoners to vote, and denying it violates the concept of self-government that the founders cherished. Granting this right also makes sense for the country in terms of politics and policy. As prisons grapple with the explosion in their populations in the past 20 years, allegations of prisoner maltreatment multiply, and criminal justice reform moves to the fore of our political debate, we should consider that one of the best ways to solve these intractable and expensive problems is to listen to those currently incarcerated—and to allow them to represent themselves in our national political conversation.

In the United States, the debate about prison voting rights is virtually nonexistent. Only two states, Maine and Vermont, allow the practice. If anything, the movement has gone backward: Massachusetts and Utah both revoked this right in the past two decades. In Massachusetts, this occurred via state referendum after some state inmates organized a political action committee, setting off a harsh rebuke from the state’s governor, who said, “Criminals behind bars have no business deciding who should govern the law-abiding citizens of the Commonwealth.”

Telling prisoners they cannot vote is premised on the idea that convicts undergo a sort of temporary “civic death”—a suspension of normal rights as citizens while they are behind bars. And indeed that was once true of prisoners in this country. But the federal government has made strides away from the notion of civic death over the past century. In recent years, the Supreme Court and Congress have affirmed a variety of constitutional rights for prisoners. They have rights of religious freedom under a 2000 federal law. Prisoners also retain some First Amendment free speech rights to hold and express political opinions. Most important, the Supreme Court decided that prisoners cannot have their citizenship stripped as a punishment for a crime. As Justice Earl Warren wrote in the 1958 case Trop v. Dulles: “Citizenship is not a right that expires upon misbehavior.”

Although he did not acknowledge this, Warren’s insight shows us why ex-felons deserve the right to vote: If prisoners remain citizens and retain their civic status throughout their sentences, then it follows that prisoners should enjoy the most basic of their civil rights, the right to cast a ballot. Disenfranchising them creates a class of people still subject to the laws of the United States (they were, after all, punished under that law) but without a voice in the way they’re governed—not unlike taxation without representation.

This also creates a kind of caste system, one that’s eerily similar to a dark chapter in our past. The vast majority of states’ prisoners cannot vote, yet they’re often counted in the population for the legislative district of their prison, the main factor that determines a state’s number of representatives and its presidential electoral votes. It’s a practice the NAACP calls “prison-based gerrymandering.” If that sounds familiar, it should: Such a policy resembles the Constitution’s notorious three-fifths clause, which denied slaves the right to vote but counted them in the Census for the purposes of amassing more pro-slavery representatives. (In some states, prisoners are counted in their home districts, which evens out the representation. But still, those prisoners are not voting for those representatives.)

Other advanced democracies are now recognizing the right of prisoners to vote. The European Court of Human Rights held in 2005 that Britain’s blanket ban on prisoner voting violated the democratic rights of its prisoners. The court reasoned that the government could punish citizens by revoking their liberty—but could not uniformly revoke the most central right of that citizenship, the vote.

We can start with the issue of prisoner abuse. We already know that prisoners are subject to abusive and inhumane conditions. In a 2011 ruling that held overcrowded California prisons in violation of the Eighth Amendment, Justice Anthony Kennedy wrote that in California alone, an inmate “needlessly dies every six or seven days.” Plenty of other prison practices, such as solitary confinement, are just now receiving public scrutiny, and there are likely more troubling conditions we don’t know about. Under the current system, ending abusive practices requires years of expensive litigation as prisoners sue over maltreatment and prisons adjust to the rulings. We could improve prisons much more quickly and cheaply by creating a political constituency of prison voters.

The deprivation of liberty and the loss of control over everyday interactions, including the ability to see one’s loved ones on a daily basis, are all severe constraints imposed by incarceration. One can be punished without being subjected to civic exile.

If we really care about felons’ post-release political participation, it is important that they be able to participate while they are in prison. The impact of prisoner voting is potentially transformative. Over 2 million Americans are in prison or jail, more than the population of Rhode Island. A sensible approach would be to count prisoners as part of their home districts and to allow them to vote there. This would respect the appropriate democratic parity between the right to vote and the weight of representation.

Like Loading...
‹ Once Again, the Deep State of Governance Rescues Us from Autocracy
Fairfax County: Conservative Greenhouse ›